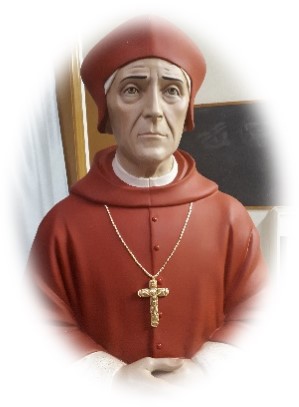 Who was St. John Fisher?

St John Fisher was born in England in 1469, earned a master’s degree in theology and the arts and became a priest at the age of 22. He was an English Catholic bishop, cardinal, theologian and martyr. As an academic, he also served as Chancellor of the University of Cambridge.

In 1504, Fisher became the bishop of the Diocese of Rochester and fought to maintain the integrity of the Catholic Church.

After King Henry VIII divorced Catherine of Aragon to marry Anne Boleyn in 1533 without an annulment from the Pope, Fisher preached against divorce from the pulpit. Eventually, the king severed his ties with the Catholic Church and established the Church of England. King Henry VIII demanded England’s bishops sign a document acknowledging him as head of the Church. Only one - Bishop John Fisher, did not.

Fisher’s continuing defiance angered the King and he was beheaded on June 22, 1535. His head was displayed on London Bridge and then thrown into the river.

He was named a cardinal shortly before his death and is honoured as a martyr and saint by the Catholic Church.

John Fisher faced his death calmly and with great courage. St John Fisher was canonized with fellow English martyr St Thomas More in 1935. Both saints are known for their faithfulness and deep love for the Church; they were faithful servants to the king but put God’s kingdom first.

His body was buried first at All Hallows, Barking (an ancient Anglican Church), and then moved to St Peter’s Ad Vincula in the Tower (Parish church of the Tower of London), where it lies beside that of Sir Thomas More.